Ice-cream: one of the most important food groups. It’s the ultimate comfort food companion. Not just a dessert, but also perfect for breakfast, dinner, afternoon tea, or midnight snack.
The only problem is that more people experience allergic reactions to dairy products than almost anything else. Luckily, these unfortunate people are no longer excluded from the community of ice-cream eaters. There are many absolutely scrumptious alternatives to dairy ice-cream—you could almost say it’s not the lactose-intolerant people who will be missing out, but their poor friends, who still have to eat boring old regular ice-cream.
Those with animal welfare concerns (rather than allergy concerns) can also enjoy these delicious alternatives to dairy ice-cream because no cows are involved. This means no cruelty to animals takes place. It’s also better for the environment to go for plant-based ice-creams because the dairy industry is a major emitter of greenhouse gases in all stages of the process—from the greenhouse gases directly produced by the digestive processes of the dairy cows to the fossil fuels used to refrigerate and transport the finished product.
In making ice-cream, the most commonly used alternatives to milk or cream are products made from soy, oats, cashews, and coconut milk. Coconut milk is especially popular because it’s so thick in consistency, rich and creamy. Coconut milk doesn’t occur naturally (that’s coconut water, found inside coconuts) but is produced by grating the coconut flesh, cooking it in water, and straining out the liquid. This ingredient is a common component of many Thai and Southeast Asian cuisines and is also particularly excellent for making ice-cream.
Coconut cream is derived from coconut milk in much the same way that normal cream is skimmed off (cows’) milk: when coconut milk is left to stand for 24 hours, a solid cream rises to the top and can be skimmed off, leaving skimmed (coconut) milk behind.
You can buy chickpeas canned in water (NB, don’t choose a saltwater version for sweet dishes); once you’ve used the chickpeas, don’t throw away the remaining liquid. This miracle ingredient is called AQUAFABA, and it is easy to see why it is so highly prized by vegan foodies. All you need is a whisk and a little elbow grease (you can use an electric mixer if you really want). Then, this “water” can be whisked into a stiff foam and used exactly like well-beaten egg whites.
Aquafaba does retain a slight whiff of beany flavor, but by the time you’ve cooked it or added strongly flavored ingredients like vanilla or chocolate, it’s virtually undetectable. As a good rule of thumb, substitute 1 Tbsp aquafaba for one egg yolk, 2 Tbsp aquafaba for one egg white, or 3 Tbsp aquafaba for one whole egg. 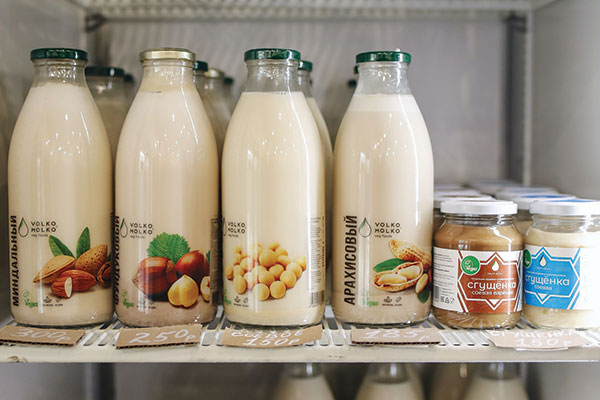 Below are a few hand-picked recipes for dairy-free ice-creams that are sure to tickle your tastebuds—note that recipes should be used only as a starting point for whipping up your favorite ice-cream. If you can’t find the perfect recipe, don’t stress! You can invent your own.
Do you just happen to have a few ripe bananas at hand and some left-over condensed milk from a pudding? Try cutting up the bananas, freezing them, then whisking them until they are frothy and creamy. Who knew? Frozen and whipped bananas come out rather like frozen yogurt. Try adding a bit of this and that (condensed milk and lemon juice, vanilla extract, mint, frozen strawberries) too. Almost all the best recipes are first produced by creativity and experimenting.

This indulgent treat will have your non-vegan friends gnashing their teeth with envy.

When you’ve had enough coconut-derived ingredients, here is something a bit different.

Heat hemp milk in a saucepan over medium heat until warmed (about 5 mins).

Remove the saucepan from heat and stir chia seeds into hemp milk.

Cool mixture in the refrigerator for 3 hours.

According to the manufacturers’ instructions, blend the mixture in an ice-cream maker until frozen (25-30 mins).

(Of course, if you don’t happen to have an ice-cream maker, you can just freeze the mixture in a dish—preferably a shallow dish, and preferably keep stirring occasionally to improve the ice-cream’s texture.)

Simmer water and sugar in a medium saucepan over medium-high heat until sugar is dissolved.

Freeze until slightly firm but not frozen.

Beat until smooth (using an electric mixer or using some elbow grease). Freeze until firm (about 2 hours).

How to Get a 6 Pack? Best Exercises

Everything You Need to Know About Infrared Sauna

In our portal you will find content of various kinds: diseases and treatments, well-being, natural remedies, diets and recipes, psychology, couples, motherhood and lifestyle.


Check out our partners for